Professor James Kennett, University of California at Santa Barbara:
The biblical “sin cities” of Sodom and Gomorrah could have been destroyed by a meteor “cloudburst” that incinerated all 8,000 inhabitants, a fascinating new study suggests. The giant space rock exploded over the town 3,650 years ago, creating a fireball.

In the Bible, God was said to have been enraged by the wickedness of the inhabitants of Sodom and Gomorrah, raining “fire and brimstone” upon them. Now there seems to be hard evidence that a “heavenly event” really did happen around that time. The cosmic calamity laid waste to the Jordan River Valley’s northern shore, razing a huge 100-acre city to the ground. It also exterminated other cities and multiple small villages. There would have been no survivors.

The epicenter of Jordan is located at what is today known as Tall el-Hammam. An ancient palace was flattened, along with the perimeter walls and other structures. Detonation occurred about 2.5 miles above the ground.  Even at that distance, the blast created a 740 mph shock wave. It would have leveled most of the buildings. None of the 8,000 residents would have survived the initial blast or the rock melting temperatures that followed.

Human remains suggested they had been blown up or incinerated, with extreme disarticulation and fragmentation of bones. “We saw evidence for temperatures greater than 2,000 degrees Celsius,” says study lead author Professor James Kennett of the University of California at Santa Barbara, in a statement.

An international team also found building materials and pottery shards melted into glass. Mud bricks had heat bubbles. These are all indications of unusually high temperatures, which would have occurred during the biblical account of the destruction of Sodom and Gomorrah. There was no man-made technology at the time that could have produced such astonishing damage.

“There is evidence of a large cosmic fireball, close to Tall el-Hammam,” says Prof. Kennett. He likens the extraordinary event to the 1908 Tunguska Event when a 12 megaton meteor destroyed 80 million trees across 830 square miles of eastern Siberia.

Further proof was provided by the identification of melted metals, including iron and silica, in samples of soil and sediments. The settlement had hosted early civilization for thousands of years. At the time it was ten and five times larger than Jerusalem and Jericho, respectively.

“I think one of the main discoveries is shocked quartz. These are sand grains containing cracks that form only under very high pressure. We have shocked quartz from this layer. That means there were incredible pressures involved to shock the quartz crystals. Quartz is one of the hardest minerals. It is very hard to shock,” explains Kennett.

The fireball also explains the unusually high concentrations of salt in the basement layer, which reached 25% in some samples. “The salt was thrown up due to the high impact pressures,” he adds.

The meteor is believed to have broken up upon contact with the Earth’s atmosphere. “And it may be [that] the impact partially hit the Dead Sea, which is rich in salt,” says Kennett. It redistributed salt-rich crystals from the local shores of the Dead Sea, wiping out other communities across the region. They may have included the biblical city of Jericho, which underwent violent destruction at the same time. 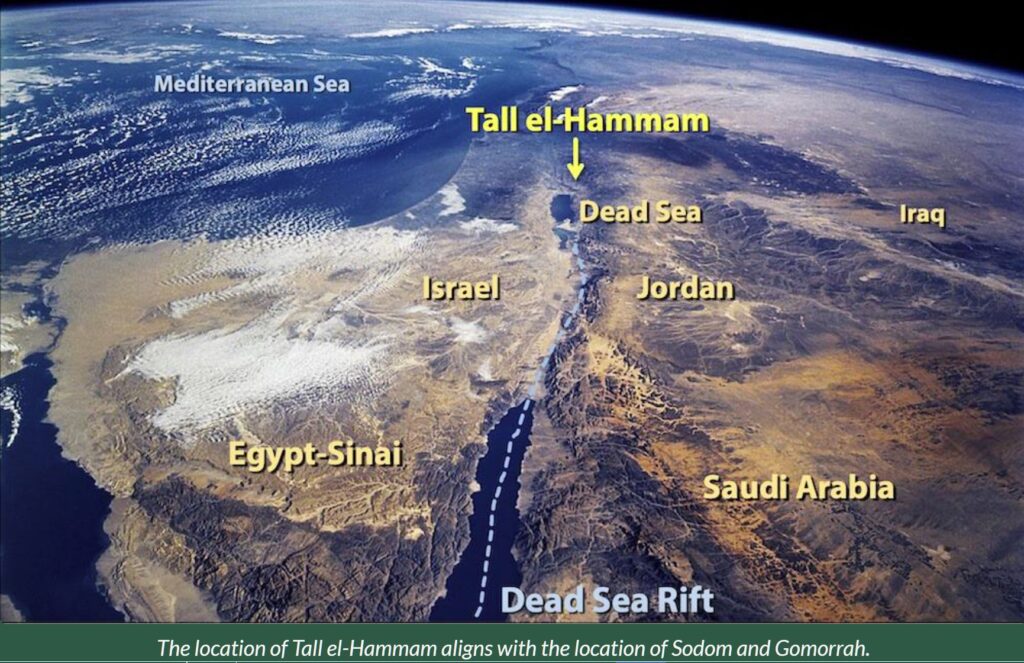 The truth about Sodom and Gomorrah as given in the contacts between Billy Meier and the Plejaren.

Contact Report 215:
Billy: Aha. And since we are already talking about down there: what was it with Sodom and Gomorrah; what actually happened there – how were these two cities destroyed?
Quetzal:
117. Several factors are to be mentioned:
118. On the one hand, a meteorite fell to the Earth and exploded high over the area of the two cities, which would now actually be designated as larger villages.
119. This led to devastating destruction of both cities, triggering a massive earthquake, by which the Earth was torn open – like in Petra – and by underground volcanic activity, small and larger chunks of sulphur were flung high and across the country, which also naturally caused much disaster, and by this – as also by the exploding meteorite – many human beings were killed.
120. The remaining part of the total destruction was caused by the megalomaniac and crazy God of the Hebrews, an extraterrestrial who had his headquarters deep under the pyramid of Giza.
121. His punishment for the disobedience of the population of Sodom and Gomorrah, against his commands, was that he let two small atom bombs ignite over the two cities, which finally levelled everything to the ground, killing all humans and animals.

Contact Report 230:
Billy: I still have some questions to ask. At the official 215th contact on 28 February 1987 we spoke of Sodom and Gomorrha. In response to my question about what had actually happened, you explained this here which I read aloud: “Regarding this, there are several factors to be mentioned: On the one hand a meteorite fell to the Earth and exploded high above the area of the two cities, which would today actually be designated as larger villages. This led to devastating destructions of both cities and also caused a severe earthquake, by which the earth was also torn open – like in Petra’s case – and small and larger chunks of sulphur were flung up and across the land by underground volcanic activity, which of course also caused a lot of calamity, and as a result of which – as well as by the exploding meteorite – many human beings were killed. The remaining part of the total destruction was triggered by the megalomaniac and irrational god of the Hebrews, an extraterrestrial who had his headquarters deep beneath the Great Pyramid of Giza. His punishment for the disobedience of the population of Sodom and Gomorrah against his commands was that he had two small atomic bombs be ignited over both cities, which finally levelled everything to the ground and killed all human beings and animals.”
So much then from your explanation. But now I have been asked about other things, which I could not completely answer based on the explanations of Sfath and Semjase. Hence the question was asked how the Dead Sea came into being, on whose shores the cities of Sodom and Gomorrah were located. And it was asked where the volcano had been, and why no ruins of the two cities have been found so far, and so on.

Quetzal:
515. In fact, these questions have never been discussed, which is why I will deal with them and provide some further explanations.
516. So listen then:
517. The Dead Sea is not really an ocean, but a salt lake without runoff with a lot of potash salt and bromine salt, whereby the total concentration is to be calculated with 33 percent, in the so-called Jordan Trench.
518. As you know, it is in Arabic language …

Quetzal:
519. That’s what I was about to say.
520. The Hebrew name is Yam-Hammelah = Dead Sea, which however is also known to you.
521. The lake is 15 kilometres wide and 80 kilometres long and covers an area of 1,020 square kilometre.
522. Due to the peninsula Lisan as well as due to solid sediments of salt, the lake i.e. the Dead Sea is divided into a small basin in the south and a large basin in the north.
523. The Dead Sea is about 400 meters deep, and the bottom of the Dead Sea lies at the deepest point 829 meters below sea level, which is the deepest depression on Earth.
524. The origin of the Dead Sea can be traced back to a primeval earthquake, during which the salty and partly rocky earth was deeply torn open and formed a deep canyon, in which in the course of time many waters accumulated, especially through the very ancient Jordan, which flows into the salt lake in the north.
525. Then about 4,500 years ago the big catastrophe occurred, as I explained on 28 February 1987.
526. However, in order to explain the events of the volcanism and the invisible ruins of Sodom and Gomorrah in more detail, the following shall be said:
527. The events with the meteorite, the ignition of the two small nuclear bombs of the irrational God as well as the volcanic eruption and the earthquake took place within a few hours and thus in rapid succession.
528. There were two earthquakes, the first of which had a magnitude of 6.3 according to the terrestrial Richter scale and the second a magnitude of 8.6, which resulted in devastating consequences.
529. Since the cities of Sodom and Gomorrah were built on very unstable and loose ground in the near shore area of the Dead Sea, both cities slipped due to a huge landslide into the Dead Sea and sank on its bottom.
530. The landslide was caused by an enormous water pressure from the ground, from which water was pressed up, causing the layers of the ground to liquefy and slide.
531. From the beginning of the landslide to its end and until everything disappeared in the Dead Sea, a time of just 27 minutes passed.
532. This is the reason why practically no ruins of the cities can be found in the shore areas of the salt lake.
533. Only scattered ruins, which were located outside the cities, remained and were buried under sand and dust.
534. The fire, however, which rained from the sky before the two cities were completely destroyed and sank into the Dead Sea, consisted of glowing chunks of sulphur and glowing soil, whereby everything was flung up from within the ground by enormous volcanisms and rained down on the cities.
535. This volcanism, however, was not of the usual kind as it appears with normal volcanoes, because it was truthly a methane volcanism, which means that methane gases ignited inside the Earth in large chambers.
536. This led to tremendous explosions, which tore open the ground in several places, eventually forming smaller craters from which the sulphur chunks and the glowing earth were ejected, thereby causing, so to speak, fire to rain from the sky.
537. Is that enough?

Contact Report 248:
Billy: Did your ancestors have something to do with Sodom and Gomorrah?
Ptaah:
149. Not the ancestors of our own lineage but those of diverging lineages, for these interfered in the affairs of the ancient Jews, who degenerated – for example, in Sodom and Gomorrah – into wide-scale incest, for which they were punished with a total annihilation by nuclear fire, etc. by the one who was angry about these unbelievable activities.